We assess the influence of the mid-latitude westerlies on local surface climates in the reach of the Indian Summer Monsoon and show that a southward shift of the upper-tropospheric westerlies produces two prominent surface dipole patterns in the core monsoon season (July-September).

High Asia has experienced strong environmental changes in recent decades, as evident in records of glaciers, lakes, tree rings, and vegetation. The multi-scale understanding of the climatic drivers, however, is still incomplete. In particular, few systematic assessments have evaluated to what degree, if at all, the mid-latitude westerly circulation modifies local surface climates in the reach of the Indian Summer Monsoon. 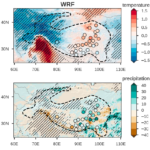 Climatic anomalies in (top) 2-meter air temperature and (bottom) precipitation during July-September seasons when the westerly wave track is relatively far south, simulated with the WRF model for all relevant seasons between 1980 and 2014. Points indicate station data, stippled areas denote statistical significance (accounting for spatial autocorrelation), and the dashed bold line is the 2000-m elevation contour to delineate High Asia.

Our methodology combined reanalysis (observation-based) datasets, station observations, and atmospheric modelling. The atmospheric modelling was done using the advanced research version of the atmospheric Weather Research & Forecasting (WRF) model. The code was developed by, and is maintained by, the National Centre for Atmospheric Research (NCAR; https://ncar.ucar.edu) but bug fixes, code development and physics improvements are contributed by the large community of users. The model is commonly configured with
telescoping nested domains, from a large, coarser-resolution outer domain that is forced at its lateral boundaries by a global atmospheric reanalysis, to a finer-resolution innermost domain covering the study area. The model is designed for highly parallel computing.

We showed that a southward shift of the upper-tropospheric westerlies contributes significantly to climate variability in the core monsoon season (July-September) by two prominent dipole patterns at the surface: cooling in the west of High Asia contrasts with warming in the east, while moist anomalies in the east and northwest occur with drying along the southwestern margins. Circulation anomalies help to understand the dipoles and coincide with shifts in both the westerly wave train and the South Asian High, which imprint on air mass advection and local energy budgets.

Thomas Mölg received his diploma and doctoral degrees from the University of Innsbruck (AUT). His postdoctoral research took place at Innsbruck, University of California – Berkeley, and TU Berlin. Since 2014, he has been Professor of Climatology at FAU Erlangen-Nürnberg. Mölg’s research is at the interface of atmospheric and cryospheric sciences and ranges from the weather time scale to the climate of the past 150 years.