The design of ligand-binding proteins has proven a difficult task [1]. We aim to analyze and redesign the binding landscape of two periplasmic binding proteins (PotF/PotD) by a combinatorial approach using MD and experiments.

PotF and PotD undergo large conformational rearrangements upon binding of their cognate ligands, PUT and SPD, respectively. Recently, PotF’s selectivity was swapped to SPD by grafting the first shell of residues in the pocket [2]. Further research suggested that the concrete protein closure might depend on the bound-ligand or/and specific mutant form. In this work we aim to (i) understand PotF/D intricate modulation by ligands and mutations and (ii) redesign new PotF variants selective for new ligands.

The different systems of study in this work were produced with he MD software ACEMD [3]. The simulations ran using an unsupervised adaptive sampling protocol that allows for a more efficient exploration of the landscape without biasing the dynamics of the system [4]. The simulation ensembles were analyzed with Markov state models (MSMs), a probabilistic method that allows to estimate thermodynamics and kinetics of binding in equilibrium [5]. 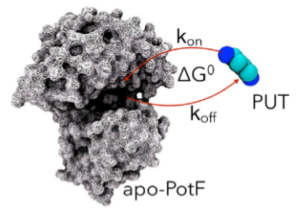 We have performed large-scale molecular dynamics on the PotF:PUT and PotF:SPD systems comprising more than 100 μs. We projected our ensembles onto a dihedral subspace defined by the protein opening and twisting angles, which we used to produce a 3-state MSM for each ensemble. The analysis revealed that the one of the systems explores a wider conformational landscape than the other as was suggested by previous experiments. The basic understanding of the wild-type systems is very useful for the setting and analysis of the next simulation batches containing protein mutants.

The results summarized here will take part in a manuscript that is currently being drafted. The global idea and proposal might be used as a proposal for the DFG grant.

Noelia Ferruz received her B.Sc. and M.Sc. in Chemistry in Zaragoza, Spain (2011). After a year as a M.Sc. student in Cambridge, UK, she undertook a M.Sc. in Bioinformatics for Health Sciences in Barcelona, Spain (2013), where she also received her PhD (2016). The she did a short stay in Boston, MA as a postdoctoral researcher in a pharma company. She is currently working as a postdoctoral researcher at Birte Hoecker’s Protein Desing Group in the University of Bayreuth.