A general circulation model (GCM) selection technique was created to select model(s) for downscaling studies. Using the atmospheric state variables at three distinct pressure levels, the ability of the GCM realizations to simulate the space-time climatic anomalies and mean state of the climate were evaluated with respect to a reanalysis product and/or observational dataset.

GCMs are used to simulate large-scale climate and its processes. However, due to their coarse spatial resolution, they cannot provide extensive information at regional and/or local scales. Downscaling is an important tool used to address this as it can provide greater spatial resolution than GCMs can provide. It involves using GCM data or reanalysis products, which can be transformed using mathematical relationships or used to force the lateral boundaries of regional climate models. With regard to the GCM data, it has been shown to be an important source of uncertainty in downscaling studies. Interestingly, there is no set GCM selection technique. 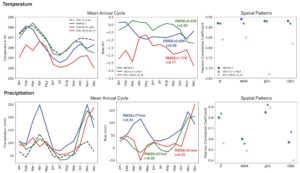 Surface air temperature and precipitation comparison from three WRF East Africa simulations for 1996-2005 to CRU TS 4.04 (dashed line), where RMSE is the root mean square error and r is the Pearson correlation coefficient.

For the case study of East Africa, the ability of the historical simulation of 33 GCM realizations to simulate the climate was evaluated. This was done two-fold. Firstly, how well they captured the space-time climatic anomalies over East Africa was evaluated with respect to the reanalysis product MERRA-2. This analysis was undertaken seasonally for the atmospheric state variables at 200, 500, and 850 hPa. Secondly, their ability to simulate the mean climatic state at the summit of Kilimanjaro (500 hPa) was determined with respect to an observational dataset. This lead to a GCM ranking. To ensure the top ranked models were better able to capture key processes of the region, their ability to capture the Indian Ocean Dipole was evaluated. Furthermore, the top and bottom ranked GCMs, along with MERRA-2, were used to, respectively, force the lateral boundaries of the Weather and Research Forecasting (WRF) model version 4.1 to a target resolution of 50 km over the East African domain (33°N-37°S, 1-75°E) for the period 1996-2005. The simulated surface air temperature and precipitation over equatorial East Africa were then evaluated by comparing them to CRU TS 4.04 data. These three WRF simulations were each split into ve two year simulations and required a total of 50400 core hours.

GISS-E2-H r6i1p3 was found to rank the highest. The sensitivity of these rankings to the reanalysis product used (MERRA-2) was evaluated by using another reanalysis product, ERA 5. A similar model ranking was produced illustrating that the choice of reanalysis product does not infer a genealogical bias. The ability of the GCMs realizations to simulate the Indian Ocean Dipole was evaluated. Higher ranked models were found to better simulate it than lower ranked ones. To determine whether a higher ranked model produced a better downscaling simulation than a lower ranked one, three WRF simulations, respectively, forced at the lateral boundaries by MERRA-2, the top ranked GCM (GISS-E2-H r6i1p3) and the lowest ranked GCM (IPSL-CM5A-LR r4i1p1) were examined and compared to CRU TS 4.04. With respect to surface air temperature and precipitation over equatorial East Africa for 1996-2005, the higher ranked GCM was found to produce a better downscaling simulation than the lower ranked one. This suggests the potential for our comprehensive yet easily applicable technique. Further work is being undertaken, to evaluate its the transferability to other regions.

Dr.Carolyne Pickler is a postdoctoral researcher in the Climate Research System Group at Friedrich-Alexander University’s Institut of Geography. She is interested in general circulation models and detection and attribution of climate change at varying scales.