Accurate knowledge of the impact of internal atmospheric variability at high altitudes is required for the detection and attribution of climate change and for interpreting glacier records. However, current knowledge of such impacts in high-mountain regions is largely based on statistical methods, as the observational data required for process-based assessments are often spatially or temporally deficient. Understanding the impact of climate modes is required for unravelling the strong retreat of Kilimanjaro’s glaciers observed over the 20th century into components due to internal and external (anthropogenic) variability. 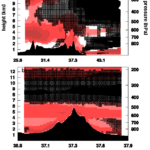 A longitudinal cross-section at the latitude of the automated weather station (installed on Kibo summit, Kilimanjaro, in February 2005) of the partial correlation between the Ocean Niño Index (ONI; a measure of ENSO events; shown in color shading) and the Dipole Mode Index (DMI; a measure of IOZM events; shown as pattern-fill shading) at a lag of 2 months for both indices with anomalies of specific humidity in (a) D1 and (b) D3, with 20-km and 800-m grid spacing, respectively, as a function of altitude and pressure.

Using a case study of Kilimanjaro, we combined twelve years of convection-permitting atmospheric modelling with an eight-year observational record to evaluate the impact of climate modes on recent high-altitude atmospheric variability during the short rains (the secondary rain season in the region). The atmospheric modelling is done using the advanced research version of the atmospheric Weather Research & Forecasting (WRF) model. The code was developed by, and is maintained by, the National Centre for Atmospheric Research (NCAR; https://ncar.ucar.edu) but bug fixes, code development and physics improvements are contributed by the large community of users. The model is commonly configured with telescoping nested domains, from a large, coarser-resolution outer domain that is forced at its lateral boundaries by a global atmospheric reanalysis, to a finer-resolution innermost domain covering the study area. The model is designed for highly parallel computing.

We examined two modes that have a well-established relationship with precipitation in East Africa, the El Niño Southern Oscillation (ENSO) and the Indian Ocean Zonal Mode (IOZM). Both modes correlate positively with humidity fluctuations, which are key drivers of glacier change, but the association is strongest with the IOZM in the air layers around the glaciers (see Figure), due to changes in zonal circulation and moisture transport, emphasizing the importance of the moisture signal from the Indian Ocean (IO). However, we found the most anomalous conditions during co-occurring positive events, due to the combined effects of extended positive sea-surface-temperature anomalies, enhanced atmospheric moisture capacity from higher tropospheric temperatures, most pronounced weakening of the subsiding branch of the Walker circulation over East Africa, and stronger monsoonal moisture fluxes upstream.

The results were presented at the European Geophysical Union (EGU) General Assembly (oral) and the American Geophysical Union (AGU) Fall Meeting (invited, oral) in 2016. The results have been described in a manuscript that is under revision for publication in the Journal of Climate. This research was funded by the DFG Grant No. MO 2869/1-1.

Dr. Emily Collier completed a BSc and a PhD in atmospheric science at the University of Alberta in Edmonton, Canada. Her PhD research was developing an interactively coupled atmosphere-glacier modelling system that includes supraglacial debris for application in the Karakoram. As a postdoc, she has investigated the impact of atmospheric variability in the Nepalese Himalaya (University of Utrecht) and in East Africa (FAU Erlangen-Nürnberg) on mountain glaciers.