A detailed, multi-scale assessment of an atmospheric river event and its impact on extreme glacier melt in the Southern Alps of New Zealand

Using dynamical downscaling with a regional atmospheric model and a set of meteorological and glaciological observations from a New Zealand glacier, we show in a case study, that mesoscale processes operating in the mountain atmospheric boundary layer of the Southern Alps govern the response of Brewster Glacier to larger-scale circulation features such as an atmospheric river. The high spatial and temporal resolution of the simulation allows a detailed assessment of the processes at play, including orographic enhancement of precipitation and föhn wind development.

Glacier-climate relationships in New Zealand have been dominated by establishing statistical relationships between large-scale climate dynamics and local-scale mass balance variability. This way, recent studies have linked both extreme melt and snowfall events on Brewster Glacier – a glacier known to be representative for many other glaciers in the Southern Alps – to atmospheric rivers, tongue-shaped plumes of high water vapor content in the lower atmosphere that occur in association with midlatitude cyclones. However, as with other large-scale phenomena, the physical mechanisms that cause atmospheric rivers to manifest as local mass changes remain unclear. This is because the “mesoscale”, an intermediate process level characterized by the interaction of the large-scale air flow with the mountain chain, are bypassed using statistical approaches. Particularly in the light of climate change which causes many statistical relationships to break down, it is crucial to fully understand the glacier-climate relationship in New Zealand. 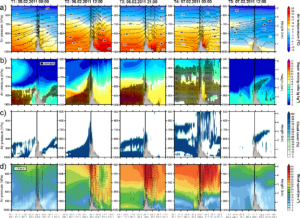 Vertical cross profiles capturing the most distinct stages of airflow modification when the upstream flow encounters the Southern Alps.

Based on the results of previous studies which found the majority of extreme melt events on Brewster Glacier in 2010-2012 to be associated with northwesterly air flow and the landfall of atmospheric rivers, we selected a typical summertime ablation event, 6 February 2011, as case study to investigate the mesoscale processes operating during this frequent type of extreme melt events. Both the synoptic and local-scale conditions characterizing the case study were examined using ERA5 reanalysis data and on-glacier meteorological measurements plus energy balance terms from a previous modeling study, respectively. A 5-day simulation was performed with the Weather and Research Forecasting (WRF) model v. 4.0.1, resolving the event by hourly time intervals. WRF is designed for effectively simulating limited areas of interest at high-spatial and high-temporal resolution using nested grids and enabling parallel computing. WRF was configured with two nested domains centered over New Zealand and the Southern Alps region, allowing for telescoping horizontal grid spacing from 6 km in the parent domain to 2 km in the region of interest. At the lateral boundaries, the model was driven by hourly ERA5 data. More than 45 sensitivity runs were obtained to optimize the model settings for the target region, each of which required around 8 hours of wall time with 400 processors on the Meggie compute cluster.

The modeling showed that during the extreme mass loss on Brewster Glacier on 6 February 2011, the following processes were crucial for transferring the high temperature and water vapor contained in the atmospheric river into available melt energy: First, the moist-neutral character of the air mass enabled the flow to pass over the Southern Alps instead of being blocked and directed around, leading to the development of orographic clouds and precipitation on the windward (western) slopes of the mountains, and warm and dry föhn winds on the lee (eastern) side. At Brewster Glacier being located just west of the Main Divide these processes fueled melt through longwave radiation and strong turbulent and rain heat fluxes within the orographic cloud. Second, precipitation was orographically enhanced by cellular convection within the cloud resulting from potential instabilities in the upstream air flow, and by the effective combination of multiple precipitating systems through the so-called “seeder-feeder-mechanism”.

The results were published in:

The research was supported by the Alexander von Humboldt Foundation and the DFG Grant No. MO 2869/4‐1. Hourly data from the innermost domain of the WRF simulation are available for download from a public repository at Zenodo (doi:10.5281/zenodo.4252462).

Elena Kropač is a doctoral researcher in the Climate System Research Group at the Institute of Geography at the Friedrich-Alexander University. Her research focuses on ocean-atmosphere-glacier interactions on a hierarchy of spatial and temporal scales in the New Zealand region, ranging from proxy-based reconstructions of past sea surface conditions through to impact studies of individual weather events on high mountain glaciers.