Moisture source regions were calculated to increase the understanding of hydroclimatic processes influencing precipitation at our study site on the western flanks of the Andes in southern Ecuador. Therefore, a well-established moisture source diagnostic was applied to modelled air parcel trajectories. A discussion of possible influences of our results on stable oxygen isotopes of tropical tree rings that can be used to reconstruct past climates completed our study.

Ecuador experiences severe droughts and floods with a highinterannual variability leading to social and economic losses. To better predict those events and to improve risk and water management in southern Ecuador, further knowledge about precipitation and its origin is necessary. Moisture sources of precipitation are often imprinted in the stable oxygen isotopes of tree rings. Isotopic signatures of such climate proxies are a valuable tool to reconstruct past climates and hence increase the data basis and knowledge of hydroclimatic processes. 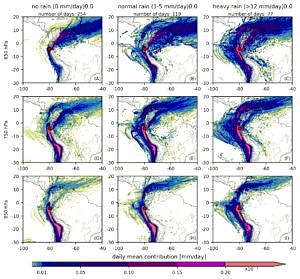 To produce the air parcel trajectories, we run the trajectory model LAGRANTO (Sprenger und Wernli 2015; Geoscientific Model Development, 8) and used ERA5 reanalysis data (European Center for Medium-Range Weather Forecasts (ECMWF)) as input dataset for the considered rainy seasons (January – April) between 2008 and 2017. The moisture source diagnostic of Sodemann et al. (2008, Journal of Geophysical Research, 113) was applied to the resulting 1 713 600 trajectories. These calculations were carried out on the Meggie compute cluster.

Heavy precipitation events in contrast to normal precipitation events at our study site showed an enhanced uptake of moisture from the eastern Pacific. This moisture source region is mostly pronounced in February and March, which coincides with the months of maximum monthly rain amounts. The seasonal march was also visible in the stable oxygen isotope signatures of the considered tree rings.

The following publication encompasses all methods and results in detail:

Nadja Landshuter works as a research scientist at the FAU Erlangen-Nürnberg. For her dissertation project in the Climate System Research Group, she investigates tropical hydroclimatic processes for decreasing the uncertainty in climate proxies like tree rings. By using trajectory and climate models, she further analyzes mesoscale processes that are influenced by El Niño Southern Oscillation events.