For the first time, direct numerical simulation of the mixing process underlying liquid anti-solvent precipitation in a T-mixer at operating condition is performed which involves non-constant density and viscosity mixtures.

Liquid anti-solvent precipitation (LAP) is a basic and promising, but not well understood, pharmaceutical manufacturing process of drugs. The outcome in the form of drug nanoparticles is primarily controlled by mixing of solvent (e.g., ethanol) and anti-solvent (water). The industrial need for computational tools predicting in advance the yield dramatically increased in recent years. The first essential step to fulfill this demand includes the understanding of the mixing process in micromixer at operating condition. We do so by applying the most precise tool to prescribe turbulent flows, direct numerical simulation. We consider water-ethanol as one anti-solvent/solvent couple and study the mixing process in a T-mixer from Stokes flow up to operating condition at which strong spatiotemporal turbulent motion is present. 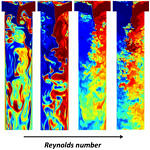 We employ a second order finite volume scheme in space (collocated arrangement) and an explicit low-storage Runge-Kutta scheme in time. The convective term in the convection-diffusion equation is discretized with a TVD scheme and flux limiter to preserve almost second order and a bounded solution for very high Peclet numbers.
We use the code FASTEST(a block-structured finite volume code) developed at the LSTM. All missing routines to address this task have been implemented.
Spanning a Reynolds number range from 1 to 5000 in a T-mixer which demands between several thousand up to 250 Mio control volumes, highly parallel computing, in particular at high Reynolds numbers, is necessary to obtain statistics at an appropriate time. 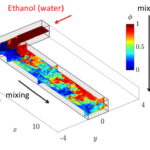 We identified and understood the appearance of several new mixing regimes (hysteresis, the transitional regime, and asymptotic state) in a T-mixer for a water-water and water-ethanol mixture.
We highlighted the similarities and differences between mixtures having constant or concentration-dependent physical properties.
In a comparative study between experiments and simulation, we could give new insights into the experimental mixing characteristic using simulations giving rise to very well agreement.
The T-mixer appears to be a novel system to study decaying turbulence from a fundamental point of view as the turbulence decay obeys power laws similar to other fundamental systems just as grid-generated turbulence. 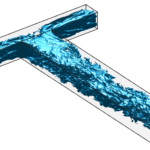 his project is a subproject of the EAM-BTS project “Bioavailability optimization for poorly soluble active pharmaceutical ingredients” funded by DFG and Bayer Technology Services.