We study the failure properties of disordered beam network models which can be considered as idealized representations of fracture processes in fibrous (bio)materials. We analyze the effect of structural parameters on failure resistance and damage patterns in 2D model by numerical simulations. Our findings show that the optimal network architecture is not a fixed one, but is largely dependent on material heterogeneity.

Beam Network Model (BNM) serves as a paradigmatic model which despite its simple structure capture the key features of fracture as a multiscale process: By abstracting from the bewildering detail of real material microstructures, such model achieves a degree of simplicity that makes it amenable to large-scale simulations and systematic studies over a wide range of system sizes, using ensembles of a size that allows for meaningful statistical predictions. It is intended to establish a numerical framework for modeling fibrous materials to study the fundamental nature of failure and its dependency on dilution disorder and material heterogeneity. Such framework is used to find the microstructures that achieve maximum values of failure strength and flaw tolerance to weight ratio. 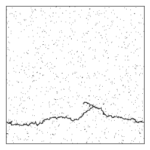 The BNM is simulated as a two-dimensional lattice which consists of interconnected beams. Using Timoshenko beam theory for the beams, the mechanical equilibrium equations and failure criteria are coded in C++ programming language.

The optimal cross-linking ratio is found to vary between 0 and 1 depending on the material thresholds irregularities. In fact, the optimized architecture of BNM is a compromise among several parameters that affect its mechanical properties and so some basic knowledge about material heterogeneity and structural defects such as voids, microcracks, etc. is needed beforehand.

The results of this study and the following studies are the basis for S.A. Hosseini’s PhD thesis. A couple of journal and conference contributions are in progress.

Seyyed Ahmad Hosseini received his Master’s degree in Mechanical Engineering from Amirkabir University of Technology (Tehran Polytechnic), Tehran, Iran in 2011. He worked as an Automotive Safety Analysis Expert at SAIPA Automotive Industries Research and Innovation Center (AIRIC) from 2012 to 2017. In 2017, he started his PhD at the Chair of Materials Simulation (WW8) under the supervision of Prof. Dr. Michael Zaiser.