Combining surface information from satellite remote sensing and climate modelling, a mass-conserving approach for mapping glacier ice thickness is applied on regional scales. The approach was used to infer an ice-free topography of the Svalbard archipelago and contributed to a consensus estimate of the ice thickness of all glaciers on Earth.

Worldwide, there are more than 200’000 individual glaciers and ice caps. Yet direct measurements on ice thickness were only collected on a small 1%-fraction of them. It has therefore been a long-standing problem and challenge in glaciology to estimate the volume of un-surveyed ice bodies, let alone to infer the basal topography. In recent years however, observations from satellite remote sensing and climate modelling efforts provide an increasingly complete and consistent picture of glacier motion, geometry changes and mass overturning. If these surface variables are reliable and consistent, state-of-the-art data assimilation strategies can constrain the stored ice volume as well as uncover the topography beneath vast icefields.

Here, an established assimilation approach is applied to regional scales. The first target area is Svalbard, an archipelago north of Norway. It is comparable in size with the New York metropolitan area. About half of it is covered by glacier ice. After successful application to Svalbard, the regional assimilation strategy was transferred to other glacier-covered mountainous areas. 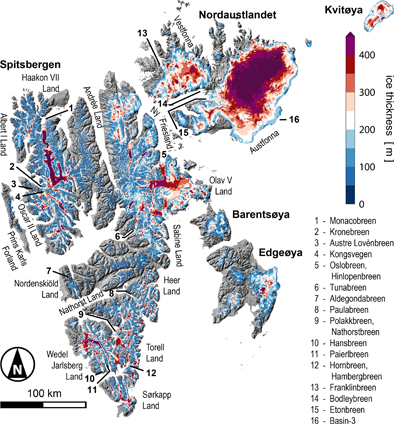 The assimilation technique is essentially based on mass conservation. Hence, if mass loss and gain of a glacier are known at the surface and if remotely sensed geometry changes are available, it is possible to determine the amount of ice that passes each year at any location on a glacier. If there are additional observations on surface velocities, thickness values can be calculated such that they concur with the inferred ice flux. This assimilation technique is implemented in the open-source ice-flow model Elmer/Ice.

For Svalbard, a large record of more than one million point measurements of ice thickness was assimilated. Therefore, the inferred basal topography is well constrained in many places. For the 1600 glaciers on Svalbard, we find a total volume that will raise global sea-level by more than half an inch if the ice is completely melted. If spread over the metropolitan area, New York would be buried beneath a 100-m ice cover. The approach was furthermore applied to all glaciers in Europe, Scandinavia, High Mountain Asia and New Zealand. These regions accommodate about half of the glaciers worldwide. These resultant thickness maps entered a global consensus estimate of five participant models. In this way, the total volume stored in glaciers and ice caps could be refined to 158000 km3, which is equivalent to 32cm of sea-level change.

The results have been described in two manuscripts:

The university press office did also release two notes on their news blog:

Dr. Johannes Fürst completed a MSc at the University of Potsdam within the Potsdam Institute of Climate Impact Research (PIK), Germany. For his PhD at the Vrije Universiteit Brussel, Belgium, he focused on the importance of ice-dynamics for projections of the Greenland Ice Sheet under future climatic warming. As a postdoc, he has investigated the importance of the vast floating ice shelves of Antarctica on the outflow from the main ice sheet (Grenoble) and the issue of reconstructing glacier ice thickness from surface information (FAU).