On December 16, Julian Hammer successfully defended his PhD thesis, titled “Design and Implementation of an Automated Performance Modeling Toolkit for Regular Loop Kernels.” Prof. Dietmar Fey, the head of the PhD committee, announced the good news after Julian had presented the main results of his work and faced questions from the general audience and from the committee.

Julian’s work, which was carried out at the Professorship for High Performance Computing (Prof. Gerhard Wellein), revolved around the automatic performance prediction of regular loop kernels. He developed and co-developed the tools Kerncraft, OSACA, asmbench, and pycachesim, all of which contributed to the overall goal of automating the tedious process of building analytic, first-principles performance models such as the Roofline Model and the ECM Model. His work had significant impact within and beyond our group. 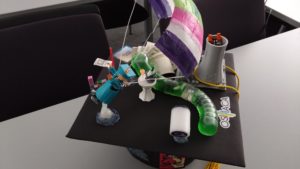 His mortarboard, built by his colleagues and fellow students in the group, showed several of his interests and aspects of his work and thesis: a paraglide, a python (with bugs!), a stencil, some cash/cache (stacked), a colorful 3-D histogram, lots of code, and a small nuclear power plant (in reference to his “Kerncraft” tool), with blinkenlights and all.

Congratulations, Julian, on a job well done, and best of luck with new challenges ahead at ZAM in Erlangen!