Investigations on the electric field of the EXO-200 experiment

The EXO-200 detector is built to search for the neutrinoless beta decay in liquid xenon. Interactions in the liquid create free charges as well as scintillation light which are detected and used in a reconstruction process in order to find the energy as well as the position of an event. The electric field within the detector was investigated and modified to improve the agreement of events generated from Monte Carlo simulations and data. 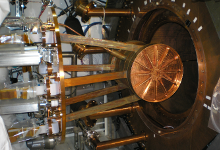 The EXO-200 experiment searches for the neutrinoless double beta decay of 136Xe. To do so, the detector utilizes a time projection chamber (TPC) filled with 200 kg of liquid xenon which is enriched to 80% in 136Xe. An observation of an event would imply physics beyond the Standard Model of particle physics.
A decay event within the TPC deposits its energy in the liquid xenon and ionizes it. A fraction of the so created electrons recombines which leads to the emission of scintillation light. The remaining charge carriers are able to escape. An electric field is applied to drift these electrons from the cathode at the center of the detector in direction of its end caps. Here, the charge as well as the light is detected, generating two signals which are combined to reconstruct the energy and the position of the event.
A Monte Carlo simulation of the whole detector system exists. Goal of the investigation is to improve the agreement of simulated Monte Carlo and data events, i.e. to change the electric field within the TPC in the simulation in order to better match the spatial distributions of these events. To do so, two approaches were carried out.
On one hand, the FEM model of the electric field was improved to also consider effects on the edges of the detector. On the other hand, data taken with the detector were used to gain information about the shape of the field within the detector. In the following, the focus is on the latter approach since it affords a large amount of computational resources which where provided by the LiMa cluster of the RRZE. 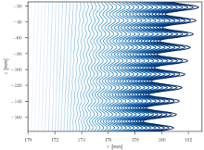 An analytic function describing the shape of the electric field within the EXO-200 detector is defined. It depends on 20 parameters and is able to directly yield the path an electron at an arbitrary position within the TPC is traveling along. The parameter space is further reduced by setting 17 of them to constant values. The remaining three parameters have a strong influence on the final shape of the field lines and are object of optimization. For a given set of parameters, the simulation of the whole detector is carried out, generating 20 million events and yielding their reconstructed positions in the end. A comparison of the spatial distribution of them as well as of data events is made in order to evaluate how well the function of the electric field matches with the field present in the detector. Since the parameter space is nonlinear, the Nelder-Mead method (also known as downhill simplex method) was chosen for the optimization. A custom implementation in Python is used to provide a flexible code tailored to the needs of the problem.

Due to the complexity of the parameter space, multiple local optima were found. All yielded parameter sets show a large improvement between MC and data. In the end, this does not reveal the true shape of the electric field within the EXO-200 TPC but does provide details about it. The developed method therefore lays the foundations to successively reveal the electric field by performing optimizations on various sets of data.

Sebastian Schmidt received his bachelor’s and master’s degree in physics at the Erlangen Centre for Astroparticle Physics (ECAP) and is currently working on his PhD at the chair of Prof. Dr. Anton.