Simulation of the glassy dynamics of soft spheres and colloidal gels

In many particulate systems a dramatic slowdown of the dynamics can be observed upon an increase of the packing fraction or a decrease of the temperature. The systems where such a slowdown of dynamics can be observed are manifold and usually the subject of very different research fields. For example, molecular liquids, colloidal suspensions, or emulsions might form glasses or gels at large densities, polymers during the folding process can end up in frustrated states, electrons in a metal might be almost localized, too many pedestrians can lead to dangerous congestions, and too many cars on a street cause a traffic jam. Though many of these phenomena are already known for a long time, the mechanism leading to the breakdown of dynamics still is the subject of ongoing research.

In our research project we consider a simple model system system of soft spheres that repel each other if they overlap but otherwise do not interact at all. Our goal is to reveal the mechanisms that are associated with the slowdown of dynamics at high densities and low temperatures. 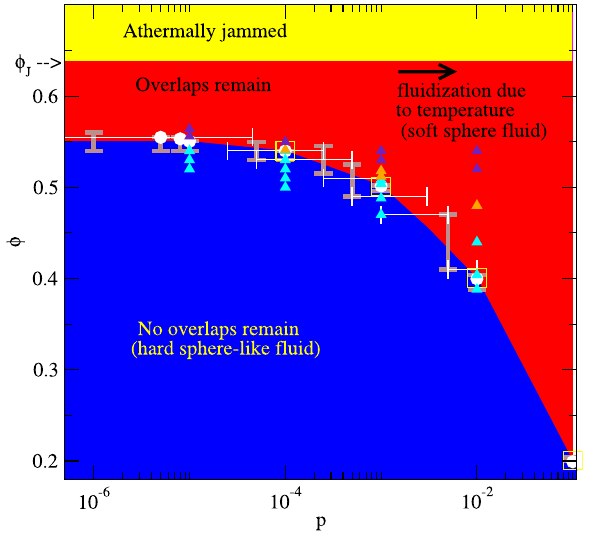 State diagram of soft spheres as a function of the probability p of steps where energy barriers can be crossed and the packing fraction f. It is shown whether a ground state can be reached (blue) or not (red) or whether a jammed state occurs even at zero temperature (yellow). (Image: Moumita Maiti/Michael Schmiedeberg, published in [1])

We modify the protocol that is widely used to study jamming at zero temperature. In that approach the particles initially are placed at random positions. Then the potential energy is minimized by searching a local minimum without crossing any energy barriers. In case there are overlaps in the final configuration of this protocol, one calls the system to be jammed while is all overlaps have been removed, the system is termed unjammed.

In order to study glassy dynamics at non-zero temperature, we introduce some random steps in order to resemble the effects of random thermal motion. Therefore, in our approach we employ a protocol that is composed of minimization towards a local minimum as known from studies on athermal jamming and steps where energy barriers can be crossed.

Our interpretation of the glass transition as a function of density and at small temperatures is as follows: While at small densities rearrangements can occur locally and the subsequent relaxation usually is fast, above the glass transition density rearrangements might affect the whole system and might occur on a timescale that is (directed) percolated in time. To strengthen our interpretation, we also study the percolation in space as well as the relaxation of a system after an enforced rearrangement event.

Our main results are published in [1] and our protocol is based on the ideas stated in [2].

While so far, we have mainly studied monodisperse spheres in 3D, we now also explore the glass transition of a bidisperse system in 2D, of ellipsoidal particles in 3D, as well as of active particles. 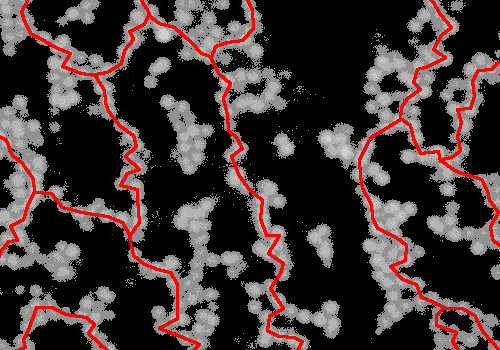 Image of a colloidal gel taken by confocal microscopy. Chains of the gel network are marked in red. (Image: Ronja Capellmann/Michael Schmiedeberg, cf. results published in [3])

We are also interested in colloidal gels, where in an additional short-ranged attraction between the particles leads to the formation of network-like structures. By using Brownian dynamics simulations, we have discovered, that the solid properties of a gel are related to a directed percolated structure of the gel network [3,4] (cf. press release by the FAU: https://www.fau.eu/2016/06/23/news/research/fau-researchers-show-how-gels-develop-their-solid-properties/).

Michael Schmiedeberg studied physics in Konstanz, Kaiserslautern, and at the Yale University in New Haven (USA). For his PhD on the theory of soft colloidal quasicrystals he was in Konstanz, at the Max-Planck-Institute for Dynamics and Self-Organization in Göttingen, and at the TU Berlin where he finished his PhD in 2008. As a postdoc, he worked at the TU Berlin, the University of Pennsylvania in Philadelphia (USA), and at the Heinrich-Heine-Universität Düsseldorf where he was the principal investigator of an Emmy-Noether Junior Research Group. Besides soft colloidal quasicrystals, he is interested in colloidal structures on substrates, glassy dynamics, jamming, anomalous diffusion, and the motility of bacteria. Since fall 2015 Michael Schmiedeberg is professor of theoretical physics at the Friedrich Alexander University in Erlangen.

Moumita Maiti was a Postdoc in the group of Prof. Michael Schmiedeberg from 2015 to 2017. She completed her PhD in 2012 in India and has worked as a postdoc in Germany since 2013. At the moment she is a postdoc at the University of Münster.