Alzheimer’s Disease (AD) is one of the most prevalent neurodegenerative diseases on earth, with alarming estimations of the evolution of patients’ numbers. Using the HPC resources, we intend to uncover some of the molecular details of one of the key players in AD, aggregates of the Aβ peptide.

It is already known from the original works of Alois Alzheimer from more than 100 years ago that one of the disease’s hallmark is the formation of deposits in the brain of patients. One type of those deposits, the plaques, is mainly composed of aggregates of the Aβ peptide, a small protein occurring in the body. The type of aggregate varies between short soluble forms and long, highly ordered fibrils. Understanding the molecular mechanism of aggregate formation may guide the development of interfering molecules, i.e. possible medications.
Since experimental techniques are limited in their ability to resolve the details of molecular motion, computer simulations have become a complement investigation method over the last decade. In this work, we apply molecular dynamics (MD) simulations to investigate the role of the first, so called ‘N-terminal’ amino acid residues, the protein building blocks, upon structure and stability of a certain experimentally determined Aβ fibril structure, since in the past most researchers considered those residues unstructured and not participating in fibril structure stabilization.

We investigated two types of Aβ fibrillar structures, full-length and truncated species, which lack the first eight residues. For each species, four sizes of fibrillar aggregates were studied, with 6, 12, 24, and an infinite number of fibril layers.
For our MD simulations we use the AMBER program suite. Calculations ran on both CPU and GPU clusters: the former are needed for the initial simulation stages to obtain a stable system and utilize MPI-parallel, optimized code; the latter are used for the MD production stage only and offer a good compromise between cost, accuracy, and speed. The HPC team greatly supported the project by providing optimized executables for different RRZE clusters.

Our MD simulations showed that the N-terminal residues possess an important role for the stabilization of the Aβ fibrillar structure: Only when these residues were present the fibrillar aggregates were structurally stable. We further identified key residues (Arg5, Glu7, Ser8) responsible for the interaction within the layers. Finally, we proposed a general mechanism involved in the formation of triple fibril structures.

The work was supported by the Alzheimer Forschung Initiative e.V. (AFI).

Anselm Horn obtained his degree in Chemistry at the FAU. After his diploma thesis in computational chemistry (Prof. Dr. Tim Clark) and some further project work at the computational chemistry center (CCC) he changed to the group of Prof. Dr. Heinrich Sticht (Bioinformatics), where he obtained his PhD for MD studies on the Aβ peptide, for which he was awarded the “CIC-Award for Computational Chemistry” from the Computers in Chemistry group of the German Chemical Society (GDCh). Currently, he is striving to finalize his habilitation in bioinformatics. 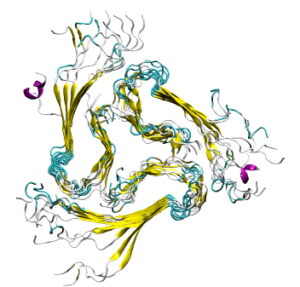 Movie of the dynamics of the full-length Aβ fibril structure. (23 MB)
(Movie created by C. A. Söldner) 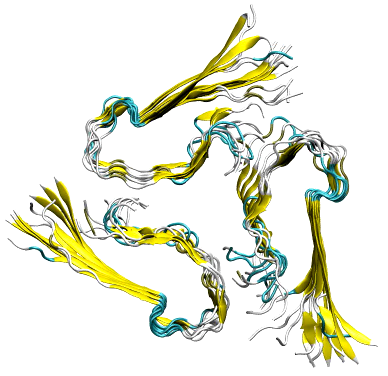 Movie of the dynamics of the truncated Aβ fibril structure. (26 MB)
(Movie created by C. A. Söldner)