The influence of tropical cyclones at Kilimanjaro

Using a combination of observations and sub-kilometer atmospheric modelling, we showed that tropical cyclones in the southwest Indian Ocean had an important influence on regional moisture transport and on precipitation at Kilimanjaro during the 2006 – 2007 cyclone season.

Tropical cyclones (TCs) in the southwest Indian Ocean have a devastating impact on the coastal populations of East Africa and Madagascar when they make landfall. However, very little is known about their impact on atmospheric conditions in the high-mountain areas of East Africa, and on the signal of atmospheric variability recorded by the small glaciers in these regions. 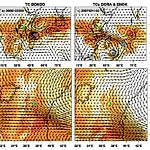 Focusing on Kilimanjaro, we combined high-elevation observations and sub-kilometer atmospheric modelling to investigate the impact of these synoptic-scale phenomena during the 2006—2007 cyclone season, which was characterized by anomalously high snowfall on the glaciers at the summit coinciding with TC activity, and by severe flooding events in northern Tanzania that caused great loss of life and property damage. The main modelling tool we used was the advanced research version of the Weather Research & Forecasting (WRF) model v. 3.9.1.1. The code was developed by, and is maintained by, the National Centre for Atmospheric Research (NCAR) but bug fixes, code development and physics improvements are contributed by the large community of users. The model is designed for simulating limited areas of interest at high-spatial and high-temporal resolution through the use of nested grids, and for parallel computing. The main simulation required ~10.000 core hours to complete.

Our analysis indicates that TCs influenced Kilimanjaro during the study period through direct moisture transport by certain storms, while other – or multiple – intense TCs contributed to triggering a lower-level westerly inflow that brought moisture from the continental interior to the mountain. The hypothesized mechanisms were supported by sensitivity simulations in which cyclone development was suppressed through vortex removal and damping of sea surface temperature in genesis regions. Two consecutive storms in December 2006 – TCs Bondo & Clovis – were associated with snowfall amounts exceeding 10 cm per day (an amount representing ~5% of the observed average annual total), and the development of an unusually deep snowpack that persisted for more than half a year, bridging the secondary dry season and insulating the glaciers from energy inputs from the atmosphere and neighboring ash surfaces. The large snow accumulation on the glaciers during TCs Bondo & Clovis contributed to the short rains of 2006 being the most anomalously positive on record at the observational stations, which suggests that these synoptic-scale phenomena have the potential to complicate the extraction of climate signals from Kilimanjaro’s glaciers.

The results were presented at the European Geophysical Union (EGU) General Assembly (oral) in 2018 and published in the Journal of Geophysical Research: Atmospheres (doi:10.1029/2019JD030682). Daily mean WRF data from the main simulation are available for download at the Open Science Foundation (doi:10.17605/OSF.IO/3NRST). This research was funded by the DFG Grant No. MO 2869/1-1.

Dr. Emily Collier completed a BSc and a PhD in atmospheric science at the University of Alberta in Edmonton, Canada. Her PhD research was developing an interactively coupled atmosphere—glacier modelling system that includes supraglacial debris for application in the Karakoram. As a postdoc, she has investigated the impact of atmospheric variability in the Nepalese Himalaya (University of Utrecht) and in East Africa (FAU Erlangen-Nürnberg) on mountain glaciers.